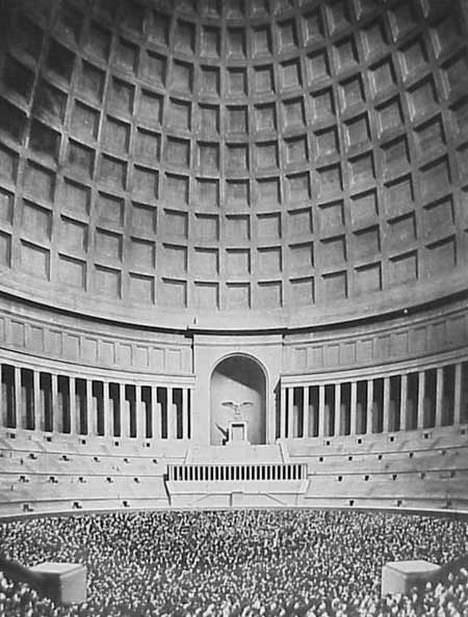 It is the dome to end all domes, the brain child of Albert Speer and Adolf Hitler is known as the Volkshalle. We do know that the evil Nazi regime is occupied with science, occultism, voodoo and many other alternative ways that they believe would help them win the war, but I never know that they are interested in illusions too.

What make the Volkshalle or better known as the Great Dome interesting is the interior, take a good look at the illustration of the hall and the shadow of the pedestal with the Nazi eagle figure, the illusion is in the form of Hitler’s face, believed to appear only at a particular time of the year. For your information, the Great Dome do not exist, it is just a proposal that never took off probably due to the out break of the war, anyway most of Albert Speer’s works never survive the war, and even if it does survive the war, the people of Germany and the allies tore it down except for the Olympia Stadium are we not suppose to preserve history be it good or bad?

Albert Speer survive the war and was sentence to twenty years in prison for slave labor, he claims that he had no direct involvement or knowledge of the Holocaust, although he admits having blinded himself to its existence and expresses remorse for this.