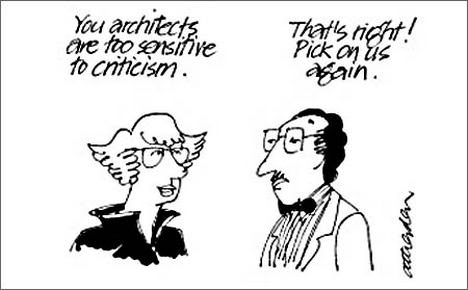 Bruce Angle and Associates cartoons by Geoffrey Atherden were featured in Architecture Australiafrom January 1984 to June 1990 and illustrated the associated publication What, if anything, is an architect?by Tom Heath. Image Source : AA

I like this cartoon, very meaningful. Kind of remind me of a quote my friend posted in his msn messenger.

Do not praise me, praises kills my determination.
Do not backstab me, because you are pushing yourself to the end.
Do not support me, critique me, I need that to complete myself.

Sometimes the lecturer can be nasty, I hate it when they bang you like a stray dog and bitch. I mean its okay to critic a student if their works are not up to standard, but there is always a limit to how one should critic. Use proper words, words that do not hurt their feelings. I once recall that one of my lecturers commented my group’s work and she said “what is with that blo… (Bloody)… “.

Criticism has many functions and many modes – it is not a simple matter of declaring a work “good” or “bad”, although the exercise of judgment has its place. Nor does it simply reiterate what the architect thought she or he was doing. Good criticism involves interpretation, but the frame of interpretation may vary widely – a result of both the particulars of the project and the background and interests of the critics. Effective criticism brings varied types of knowledge and experience to bear on a work. It opens a project to the wider world, while also using the specificities of a project to reflect on more general conditions. It might place a project in a historical, political or theoretical context; it might convey a sense of experiential pleasures; or it might use the project to reflect on the disciplinary structures of architecture. The best criticism tells both architect and reader something they didn’t already know.

20 Amazing Quote About Architecture And Design