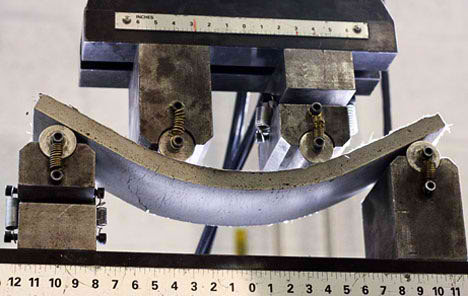 First they have bendable concrete, then these engineers introduced light transmitting concrete to the world, now we have a self-healing concrete that is bendable.

A team led by Victor Li of the University of Michigan in Ann Arbor has developed a new type of concrete that bends under pressure and the best part is, it can repair itself! The self-healing concrete develops many hairline fractures when bent, distributing the pressure over its area. The tiny cracks will seal themselves with calcium carbonate when exposed to rainwater and carbon dioxide.

A slab of self-healing concrete bends under 5 percent tensile strain, the force needed to stretch a material by 5 percent of its initial size. While ordinary concrete would crumble under such pressure, the new material forms micro-cracks that can then auto-seal after being exposed to water and carbon dioxide, researchers said in March 2009. Source

A safer building during earthquakes.

Related Article ☆  All I Want For Christmas Is An Architect Outfit!