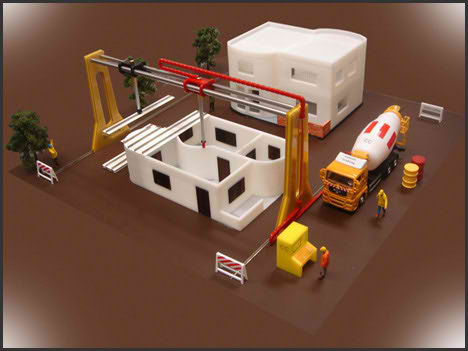 Your phones, shoes, clothes, cars, planes and almost everything man made are made automatically with machines, except for your house and it doesn’t make sense, or does it? Behrokh Khoshnevis at the University of Southern California in Los Angeles, who will soon unleash his $1.5m (£940,000) robot, according to him, the ‘robot’ or machine would fabricate the building in a layer by layer fashion – like a layered cake.

Behrokh Khoshnevis claim their machine would build the shell (wall) of a house in 24 hours, an increased in construction speed of 200 fold thus reducing the building cost by a fifth.

The idea of 3D printing could not possibly be the next big thing in buildings, prefab construction which took the world by storm has yet to make an impact, nothing beats a hand-made house. Personally, I believe all buildings should be constructed with sustainability in mind, not speed. Having said sustainability is an issue, the proposed ‘3d printing’ system does not appears to be environmentally sustainable, huge mechanical system uses ridiculous amount of energy compare to simple manual labor.