Denmark’s new National Aquarium aka The Blue Planet by 3XN

The WAF judges were delighted by the entrance experience and the sculptural form. They said, “It deals successfully with the site and finds opportunity where there is little context. It overcomes significant engineering and technical challenges.”

The whirlpool concept originates in a narrative about water, and as an image, is at once both abstract and figurative. It stirs attention with its distinctive vortex blades, but at the same time, as a building, changes dramatically depending on viewing angle, distance and daylight conditions. From the air, almost entirely white, its contours are reminiscent of a starfish. From the front, the building’s organic lines are evocative of silvery-grey waves or a vast sea creature, and on closer inspection, the facade patterning is reminiscent of fish scales. This is a building that invites interpretation. 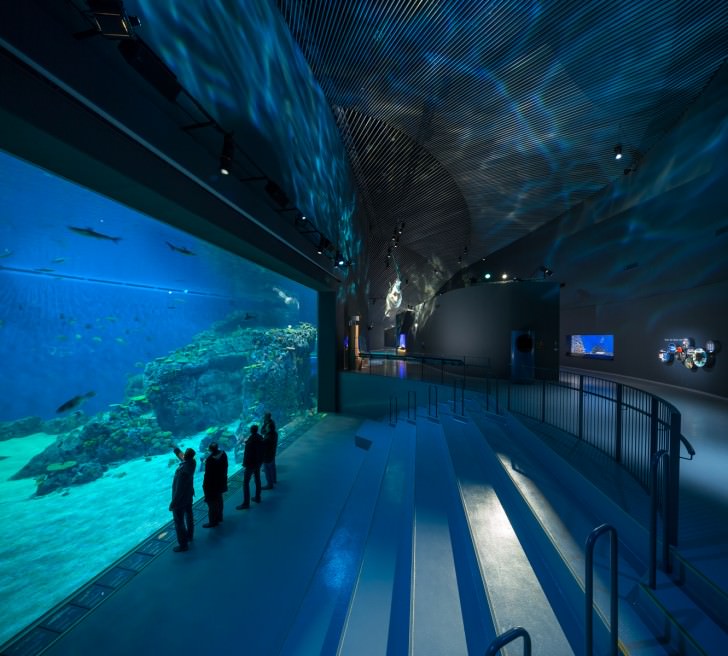 The World Architecture festival culminates with a prestigious awards ceremony on Friday evening, October 4th, where Principal of 3XN, Kim Herforth Nielsen will collect the WAF award for The Blue Planet. ”It is amazing to be among the WAF award winners, especially because we are competing against some of the very best architecture projects in the world”, says Kim Herforth Nielsen.

The Blue Planet is located on an elevated headland towards the sea, north of Kastrup Harbor. The building’s distinctive shape is clearly visible for travelers arriving by plane to the nearby Copenhagen Airport. The facade is covered with more than 33,000 small diamond-shaped aluminum shingles, which adapts to the building’s organic form.

The whirlpool concept was chosen as ideal not only for its visual associations, but also because it resolved a a practical challenge in the design brief: it ensures that one or more of the whirlpool arms, with relative ease and without disrupting the building’s integrity nor the operation of the aquarium, can be extended with more than 30 % in order to create more exhibition space.

The Arrival and Interior

Visitors reach the entrance by following the first and longest of the whirlpool’s arms, already starting in the landscape. With a smooth transition the landscape surpasses for the building, while the outdoor ponds mark the unique experience that awaits the aquarium visitors as they enter: the whirlpool has pulled them into another world – a world beneath the surface of the sea.

A circular foyer is the center of motion around the aquarium, and it is here visitors choose which river, lake or ocean to explore. By enabling multiple routes the risk of queues in front of individual aquariums is reduced. The interiors range from grand to intimate settings, allowing the architecture and the exhibits to jointly convey an array of diverse environments and moods. The curved ceilings of the aquarium are reminiscent of the baleens of a large whale.

The exhibition is a total concept offering all visitors a sensuous and captivating experience of life in and under the water. A mixture of light, sound, advanced AV-technology, projections, film, interactivity, graphics, illustrations and signs aimed at all age levels ensures that every visitor, regardless of background or interests, has the best experience possible. As the only aquarium in Denmark, The Blue Planet focuses on all aquatic life – from cold and warm waters, fresh and salt. In total, The Blue Planet contains app. 7 million liters of water and 53 aquariums and displays.

The building extends beyond the original coastline, placing special requirements on the facility’s structures in a terrain with tendency to subsidence. The structure is founded on piles and all of the sewage structures are suspended in the concrete structure. The building’s architectural facade design forms the basis for the design of the steel structures. The load-bearing system consists of 54 unique steel frames, which via their radial positioning and geometry forms the base of the curved facades.

A service line was built 1.7 km out into the Øresund to obtain suitable water for the aquariums. Moreover, the cooling system for aquariums and climate system for public areas also use seawater.

The Blue Planet has an outstanding location on the shores of Øresund, only eight kilometres from the Copenhagen City Hall Square. Motorways, Copenhagen Airport, the Øresund Bridge, Metro and international trains are within few hundred meters. 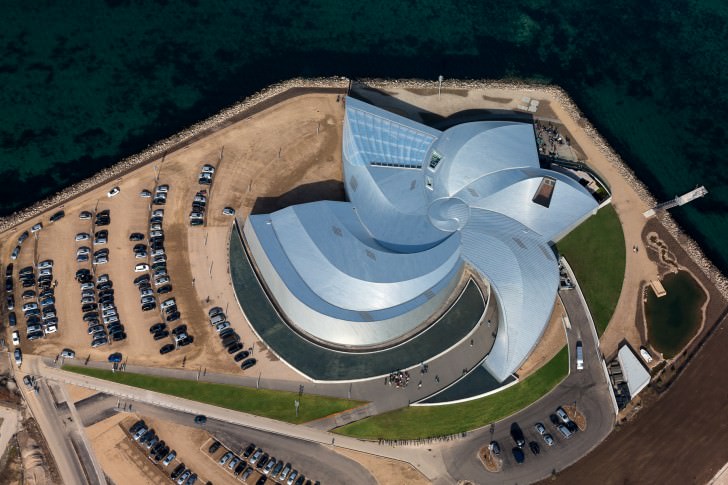 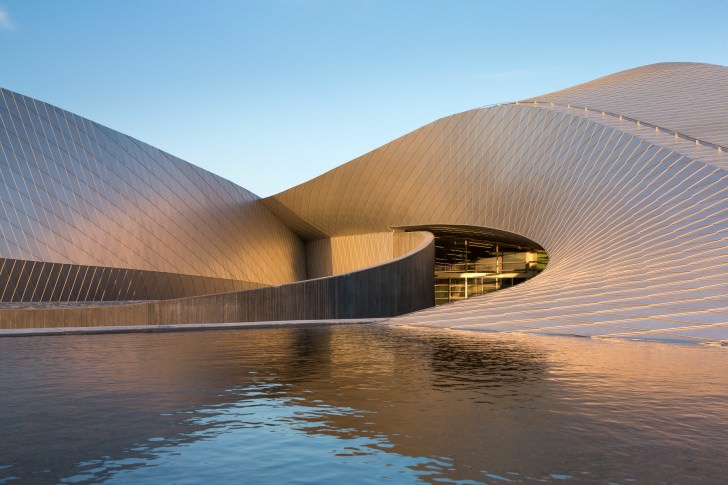 The Diary by Trevor Howells

Black is the new Blue