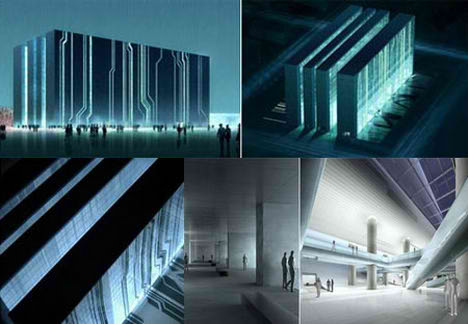 The idea behind the Digital Beijing Building is to eplore the digital age in a unique way, the building will serve as the control and data center for this 2008 Olympics. At other times it will accommodate a virtual museum and an exhibition center for manufacturers of digital products. The building resemble the bar code, which is something that is going the Dodo bird’s way. Don’t these guys know that RFID is the future? So much for a futuristic building.

Anyway, the facade itself is detailed to resemble an integrated circuitboard. The abstracted mass of the building, reflecting the simple repetition of 0 and 1 in its alternation between void and solid. According to them the building will go under constant renovation to be on par with the latest technology and design, well they are right about that, better start designing again – barcode is as good as dead, RFID is the future.

I wonder if the Chinese designer from Studio Pei-Zhu knows about the end of barcode? Its like talking to a geek about the VHS you bought just now when the entire world is embracing DVDs or Blue-ray / HD-DVD. Get your facts and concept right!