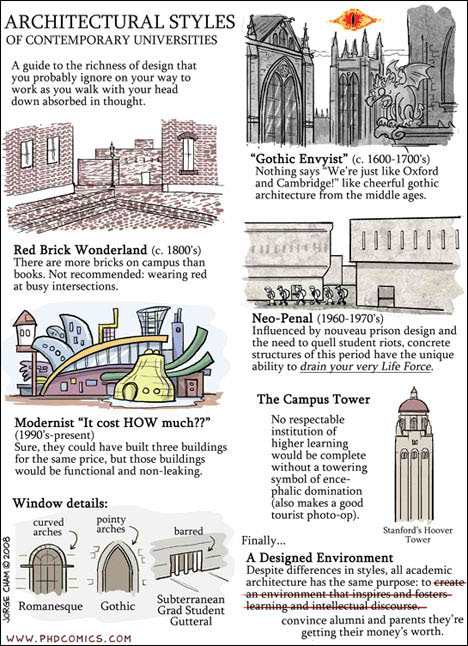 You know, the last paragraph on the architecture style of universities is sort of true – “… to convince alumni and parents they’re getting their money’s worth.”

They are so preoccupation with the idea of dress code to the extend that a private university mooted the same idea, citing that this would improve the students discipline and further enhance the quality of education. Here is an interesting story I heard from a friend of mine, according to her, a female student in the Islamic International University in Malaysia was told to dress decently according to the Muslim dress code:

Dean: ‘Why are you not wearing your head scarf?’
Female student: ‘It is just too hot and humid in Malaysia.’
Dean: ‘Do you know that hell is hotter?’

Anyway, while I was reading about the history of Gothic architecture and gargoyles, I stumble upon some really interesting facts. Gothic architecture was called “French Style” (Opus francigenum) by the Germans, this is actually an insult because back in the good old days ‘Goth’ meant rude, barbarian or barbaric, and it certainly does because the Renaissance in Italy gave birth to the new age classical architecture.

The Renaissance architects, who disliked the style, started calling it “Gothic” and the name stuck.