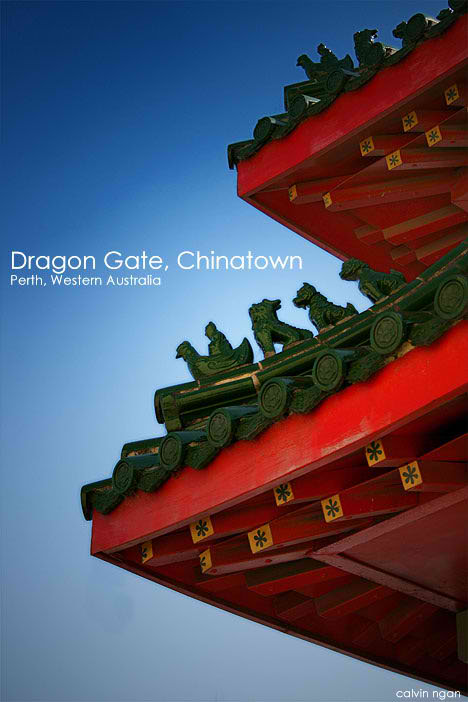 Was in Perth’s Chinatown and stumble upon this rather strange looking figure on the roof of a Chinese Gate – an unknown figure on a hen. Unlike most European’s gargoyles, this is the silliest looking gargoyle ever, however, the search results from Google revealed some really interesting information justifying the idea behind the gargoyle. According to the book ‘Chinese Symbolism and Art Motifs’ by C.A.S. Williams:

Image Source: China History Forum | The Dragon on the other end

… In the year 283 BC, the tyrant Prince Min of the state of Qi, after being defeated by a combination of other states, was strung up to the end of a roof ridge and left hanging there without food and water, exposed to the sun until he died. To stigmatize his evils deeds, the people placed a effigy riding a hen, on the roofs of their houses. With the weight of the prince, the hen cannot fly down. To prevent the hen from escaping over the roof, a qiwen was placed at the other end of the ridge. It was not until the time of Ming Emperor Yongle that other figures were added. A correct set would be in this order – hen, dragon, phoenix, lion, unicorn, celestial horse, qiwen. If more is required, any one can be repeated except the hen and the qiwen, but always so as to form an odd number up to eleven – odd number comes under influence of Yang. Over time, the arrangement and number of figures departed from the original….

Dragon? I don’t see any dragon at the edge of the roof in Perth’s China Town Chinese Gate, I guess Prince Min is on the loose, if Feng Shui and all the supposedly superstitious belief are for real then this got to be Perth’s problem! Then again, the dragon might be there but too small to be noticed.

Correct me if I am wrong, in China, villains are rewarded and remembered with statues, villains such as Mao ZeDong with his Cultural Revolution and the Great Leap Forward leaving 30 millions dead, Emperor Shi HuangDi with his Great Wall of China and Terracotta Armies, not to mention Prince Min the tyrant.