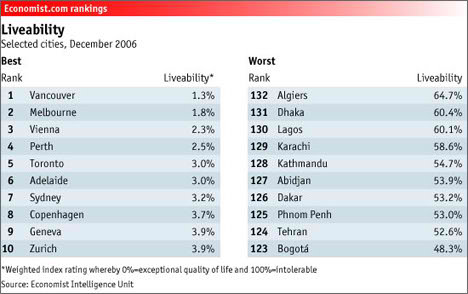 According to The Economist, Australia has four out of ten most liveable cities in the world, they are Melbourne, Perth, Adelaide and Sydney. Technically I am currently in one of the world’s most liveable city.

Some of the main factors taken into account are recreational and cultural activity in a city, Perth has quite a number of these cultural squares and recreational centers that appears to be dead. Well, at least it is peaceful and quiet over here, unlike Malaysia, crime is everywhere. You’re not a Malaysian until someone rob or con during your lifetime as a Malaysia.

Perth, the city that sleeps

6 Cities and their Skyscrapers Reaching for the Stars