“A building is a symbol, as is the act of destroying it. Symbols are given power by people. A symbol, in and of itself is powerless, but with enough people behind it, blowing up a building can change the world.” – Steve Moore

It may or may not be the most beautiful fountain in Rome but it is without doubt the most famous, last week, a man threw a bucket of red dye into Rome’s Trevi Fountain, coloring the waters of the 18th-century monument bright red.

A box was found near the fountain containing leaflets by a group that claimed responsibility for the act. The leaflets said the red paint was a protest for expenses incurred in organizing the Rome Film Festival and symbolically referred to the event’s red carpet.
The baroque fountain was not permanently damaged and the marble statues depicting the sea deity Neptune on his chariot had not absorbed the color.

See More ▼  The New Seven Wonders of the World

Judging from the irresponsible action of these protesters, what they want is to cheap publicity and a way of getting their message across the world, which they succeed pretty well. What I fear is a chain of events that might occur in the future, the fountain could become a form or symbol of protest, let us hope that the next culprit would be smart enough to use a temporary dye. 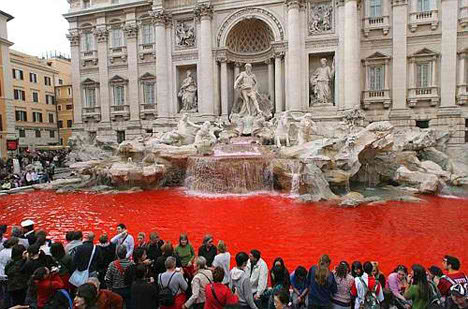 Photo by : Maurizio Brambatti, via Pruned

The New Seven Wonders of the World